If there were a ranking of today’s most significant architectural regions, Vorarlberg would certainly garner a place amongst the top ten. This is in regard not to the significance of any one individual building but to the number and density of such constructions.

This phenomenon is relatively new. While it is true that Vorarlberg’s baroque master builders are an integral part of the academic literature, in reality, those who speak of Vorarlberg’s architectural schools or pioneering architects, i.e. the generation born after 1950, are actually referring to those who have influenced architecture here for only about 30 years. Those being referenced, with the exception of a handful of pioneers who came before, are in actuality just about 60 people. This number is relatively high when considering the total population of the region is a mere 400,000 inhabitants! Such a ratio is only possible in an area where architecture is appreciated and where an architect plans every fourth house.

And yet the result is really a development rather than an explanation. “Construction artists” is a self-appointed term that architects of the era gave themselves because they were often in conflict with the architecture “establishment” and chamber officials and therefore avoided the title of architect. According to one pioneer, public appearance, unity and dialogue with one another played an important role from the very onset. Achieving the socio-politically established ideal as expressed through architecture – social, affordable, sustainable, regional – demanded the combined efforts of an entire generation, which sought new ways of living and cultural expression whilst also resisting selling out. The new architecture as first expressed by residential homes (often for housing groups), which clashed with the existing paradigm, became a clear expression of this cultural renewal and soon radiated its effects to the economic elite and the public sector. Yet as meaningful as this milieu was, time and again it boiled down to key personalities such as Eberle, Gnaiger, Dietrich, Kaufmann, Ritsch, who are now international stars and have professorships at prestigious universities.

Set somewhat apart, Bregenzerwald’s participation in this development was nuanced. In contrast to the heavily populated, industrial and commercial character of the Rheintal valley, which was largely distinguished by a suburban structure, the landscape, nature and rural-craftsmanship culture in Bregenzerwald was of primary importance. In the Rheintal valley, for instance, they built clusters of houses and farms, whilst here single homes were built. Similarly, as big developers there constructed housing communities, here in Bregenzerwald it was the young craftsmen instead, such as the architect family Kaufmann who came from the field of carpentry and whose relationship to the craft was more intimate. After the early years those outside of Bregenzerwald sought formal experiment, whilst domestically trends tended to sobriety and stringency. Architectural pragmatism, but especially the discipline of timber construction, which had in the meantime been modernised, seemed to grow stronger. Clashes with older building styles again became more significant, especially as concerned the stronger connection to the rural agricultural, particularly where it served no ostensible purpose but instead was a matter of adhering to material, dimension and proportion. Is it this adherence, which shies away from the eccentric and tends toward the conventional rather than the inimitable, which lends towards broad acceptance of such buildings? In any event, good carpenters here are able to construct better homes than architects do elsewhere and these buildings, which are casually situated in the meadows like cows, are as much a characteristic part of the landscape as farms and churches.

Constructing a list of worthwhile buildings is no easy task, as many such buildings are private homes not open to the public. Yet a stroll through Hittisau or perhaps Schwarzenberg is enough to satisfy the curious. The village of Bizau is especially recommended for just such a leisurely walk – featuring an ensemble of buildings awarded the ArGeAlp prize, Bizau comprises homes of all epochs as well as housing developments, inns and commercial, educational and municipal buildings.

Hittisau Women’s Museum is the first and only museum dedicated to women in Austria.

Dyeing Juppe Tract clothing is a craft extending back 100s of years and continues today at the Juppenwerkstatt Riefensberg.

This thoughtfully designed administration building is located in the village centre of Andelsbuch, a municipality in the Bregenzerwald.

With its clear and self-confident design, the form, orientation and internal structure of this stylish mountain restaurant are derived from the existing topography.

It takes ten minutes by cable car and fifteen on foot to reach this wooden chapel. At an altitude of 1600 meters, it sits near a small forest, just before…

The Salgenreute Chapel in…

Like a jewel, the Salgenreute Chapel is situated on a ridge in the Nagelfluh mountain range near Krumbach.

The Parsonage in Krumbach

For many years, the municipality of Krumbach has been thoroughly engaged in further developing the community. Three architectural firms were invited to develop a study of the town centre.

Construction and finishing: The "s'Ernele” addition is a building made from wooden posts and beams with a horizontal spruce strip facade. The enclosed wing of rooms was built in solid… 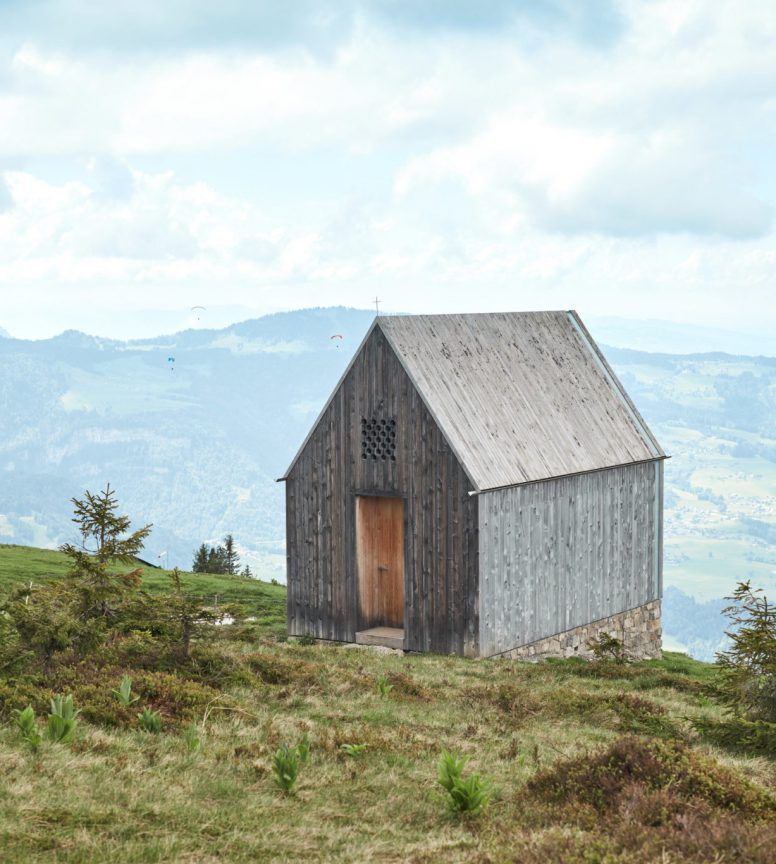 Numerous cultural and historical gems can be discovered in churches throughout Bregenzerwald from historic sacred buildings, the carefully renovated, and even modern churches.

Hiking in the forest